Hey guys as you can see down below I have my art that I have done for the pass few weeks to leave behind for Pt England School as we are leaving. The meaning of my art is that the big 2 koru’s are my parents. Between the 2 koru’s you can see in the bottom left that there are two small koru’s that represents my older 2 sisters. On the right bottom there is one small koru that is me and the other koru that is longer to the rest are my friends. And the long pattern in the middle represents my culture and the red and blue is the colour of the of our flag . The 2 yellow long koru’s are my family's from my mother and fathers side. And lastly in the top right you can see a yellow cross that represents my religion. I hope you liked my art. 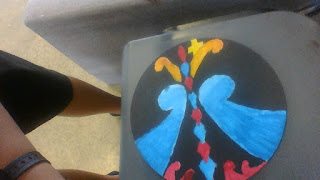 Email ThisBlogThis!Share to TwitterShare to FacebookShare to Pinterest
Labels: Badges


This is my bedmas challenge that I have today we had to solve 6 questions and each question was different. The questions contained brackets, exponents, divide, multiply, add and subtract. I hope you enjoy my work.
Posted by Glennes at 09:55 No comments:


Hey Bloggers this is my work I have done today we are learning about bedmas and solving bedmas problems I hope you like my work
Posted by Glennes at 12:36 1 comment:

Able to explain 3 or more elements (e.g. line, shape, colour, form) that artists use to share messages through their work; can identify an artist’s message (e.g personal identity, a story, opinion on social issues)

Value: He put a lightness at the front and then darkness at the back.
Colour: There are a lot of different types of colours like cold and warm.
Space: The space is how the artist put the people at the front and how when you look to see can see the back going deeper.


So for this weeks work we had to reply to someone who had advice about getting a tattoo and what somethings to think about getting it and questions. It was a fun task to do and I enjoyed it a lot. I hope you enjoy my work I have done.
Posted by Glennes at 16:41 No comments:

This is my satire writing I have done I have picked Donald Trump the president of America for my subject for the satire writing. If you don't know what the meaning of satire is it's like sarcasm and the meaning of sarcasm is the use of irony to mock or convey contempt and what I am writing about Donald Trump is the opposite of the truth I hope you enjoy my satire writing about Donald Trump down below.
SATIRE WRITING
Well isn't’ it great that Donald Trump is being the kindest person and president in the world he could be. Wow didn’t he build a wall between mexico and united states of America, well that’s so kind of him. He was even that kind that he hired a lot of people for jobs. But there have been a lot of crazy rumours about Trump and how he was mocking a disabled reporter. But I don’t think Donald Trump will do such a thing like that. Well you never know. Also did you know that Donald Trump is also an amazing actor too. Before becoming president he had been in movies and I think he was the best actor ever but that was so kind of the director’s that hired him instead of firing him. But man I wish I could have Donald Trump as my president, but he is president for the united states of America. So I guess not. I also think the age different between him and his wife is so amazing it shows his love for young people of america. Well you never know what Trump still has left for the world and America for the up coming years.

Today we had Tony a attitude talker come to our school to tell the year 7 & 8's about puberty and life lessons. First he talked to us about our hair, skin and things that happen during puberty and how we should wash everyday and take care of our bodies. 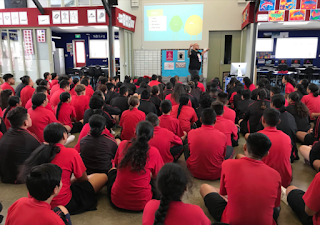 After wards he talked about how you should believe in yourself and you are valuable. To show us that we are valuable he used five dollars for an example. He stood on the five dollars and crunched it in his hands and he said it still worth 5 dollars. He also talked about when we are gonna start a relationship we should take time and no need to rush and first be great friends. So there we have it I hoped you learned and took something valuable for yourself.
Posted by Glennes at 13:09 No comments:

Who is visiting this blog?